[Note from the IRMA chair – while IRMA is very happy the Gates Foundation is deeply supportive of microbicide research, in addition to other new prevention technologies, it is very disappointing that Mr. Gates defines a microbicide as “a gel a woman can use to protect herself from getting infected.” Of course, we all know that microbicides are being developed for use by gay men and men who have sex with men. Why is this fact ignored?] 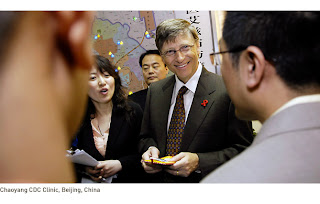 [excerpted from his full letter]

On the AIDS front, you have probably read articles talking about failed trials of vaccines and microbicides. (A microbicide is a gel that a woman can use to protect herself from getting infected.) Although these results are setbacks, in each case we are learning and moving ahead with improved approaches. I am quite hopeful that in the next four to six years we will have either a pill or a microbicide that people can use to protect themselves temporarily from getting HIV. When used on a large scale they will dramatically reduce the annual rate of infection, which is currently 2.7 million. I feel a huge sense of urgency to make sure a pill or microbicide is developed as soon as possible. There are some great scientists working on this, and I am spending lots of time asking them what the bottlenecks are and understanding how we can make faster progress. The intensity reminds me of my time at Microsoft, when we were competing with other companies to make the best database or word processor. However, in this case the competitor is a virus and all of humanity is on the same team, wanting to work together to defeat the virus.

When we get a vaccine it will be even more impactful than a pill or a microbicide, because a vaccine will protect people for much longer. But given the complexities involved, even with the great work being done, it is very likely to be more than 10 years before we have one in widespread use.

To stay alive, people with HIV need to start using anti-retroviral drugs before their immune systems become weakened, usually within five years of becoming infected. In 2003, only 400,000 people were being treated, and now some 3 million are. That is a phenomenal increase. The biggest reason for it is that the United States funded the President’s Emergency Plan for AIDS Relief and managed the effort very well. In addition the United States, along with a number of other countries, has funded the Global Fund for AIDS, Tuberculosis, and Malaria. This is a good example of how scientific innovations, in this case the invention of anti-retroviral drugs, can reach the poorest with help from governments, foundations, and drug companies. Although less than 5 percent of people with HIV/AIDS live in rich countries, it was the market demand from these wealthier patients that drove the large R&D investment in these drugs.