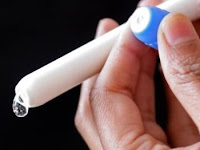 This study reports on the acceptability of 1% tenofovir microbicide gel among participants randomised to the coitally-associated use (n=50) or daily use (n=50) arms of a Phase II clinical trial in Pune, India. In a 6-month follow-up study, information on behavioural domains was collected on a 6-point Likert scale and gel acceptability was measured on a 5-point Likert scale. Random intercept logistic modelling was performed to examine the simultaneous effects of study arm, follow-up time, sociodemographic factors and behavioural domains on gel acceptability. The mean age of female participants was 32.7 years. Women in both study arms had similar sociodemographic profiles. Women liked features such as easy use of the gel and its protective effect against HIV. Messiness was the most disliked feature. Gel acceptability increased during subsequent follow-up visits in both arms, especially in the coitally-associated use arm. Non-acceptability of the gel was almost two and a half times higher in daily users (adjusted odds ratio 2.55, 95% CI 1.18–5.51; p=0.017). Acceptability differed significantly between the two study arms at 2 months (68% vs 40%; p=0.006) and 6 months (64% vs 46%; p=0.07). Acceptability was significantly lower in those participants who reported ‘messiness’ as the most disliked feature (odds ratio 2.42, 95% CI 1.02–5.72; p=0.045). In conclusion, microbicides were more acceptable in coitally-associated users than in daily users. Leakage was a problem that requires attention. Positioning of the product in a setting such as India where the majority of decision-making is done by men would need extensive and systematic education of men.