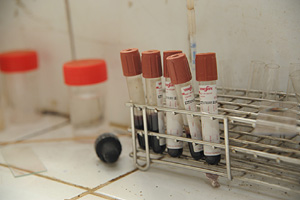 HIV is a tough enough diagnosis, but when one contracts a strain of HIV resistant to some life-prolonging medicines, treatment options are limited. A new study has found that transmitted HIV drug resistance may be on the rise in Africa, and the authors warn that unless resistance surveillance is increased, the continent’s treatment programmes could suffer.
The study, led by the International AIDS Vaccine Initiative (IAVI) in five African countries, found that the prevalence of transmitted drug resistance in Rwanda, Uganda and Zambia was considerably higher than previously reported. Of 408 people studied in Kenya, Rwanda, South Africa, Uganda and Zambia, 19 had transmitted resistance mutations. Resistance prevalence rose considerably during the study in Zambia and remained high throughout the study in Entebbe (Uganda).
“The message to take away from this study is the urgent need for regular drug resistance surveillance, which we currently do not have,” said Omu Anzala, head of the Kenya AIDS Vaccine Initiative. “If we can see transmitted resistance in such a small study then there could be much more going around.”
“We saw what has happened with malaria over the years, with resistance developing against several drugs. We need to move quickly to ensure governments are aware and are implementing drug resistance surveillance to prevent the same thing happening with ARVs,” he added.
In 2009 Kenya launched a five-year national plan on HIV drug resistance, prevention, monitoring and surveillance.
A separate study in 2010 by PharmAccess African Studies to Evaluate Resistance (PASER), a project of the PharmAccess Foundation, a Dutch health NGO, found that nearly 6 percent of patients about to start HIV treatment for the first time already had resistance to standard first-line ART.
Read the rest
[If an item is not written by an IRMA member, it should not be construed that IRMA has taken a position on the article’s content, whether in support or in opposition.]