(Check out the full press release.) 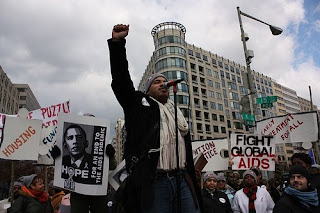 On November 20, one thousand people living with HIV and allies from across the United States rallied in front of the White House to hold an “inauguration ceremony” for Barack Obama as the president who, during his first one hundred days, will prioritize policies to end the AIDS epidemic in the U.S. and worldwide…

President-elect Obama has made historically bold commitments to reform and expand U.S. AIDS policies. His campaign promised to develop a National AIDS Strategy that includes guaranteed treatment and care for all people with HIV in the US. The campaign pledge goes on to detail a commitment to housing as an integral part of HIV services, an end to the federal ban on funding for syringe exchange, and a call to redirect abstinence-only-until-marriage sex education funding into honest and accurate programs like comprehensive HIV prevention programs.

Internationally, Obama has promised to build on President Bush’s global AIDS plan by removing the ideological strings the Bush administration attached to prevention funding. Specifically, Obama has committed to end the Prostitution Loyalty Oath and to support an evidence-based approach to HIV prevention that doesn’t overly emphasize abstinence and fidelity at the expense of condoms. He has also pledged to increase funding for the Global Fund to Fight AIDS, TB and Malaria, a multilateral program which fights the three killer diseases in over 170 countries and which is facing a major funding shortfall… 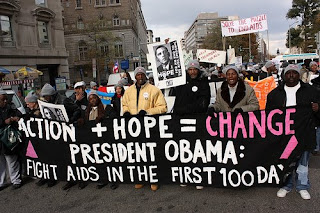 Gerald LeMelle, Executive Director, Africa Action: “Over the past five years, the U.S. has made great strides in fighting AIDS around the world, yet 33 million people remain infected with the virus, and HIV/AIDS is still the leading cause of death in sub-Saharan Africa. Barack Obama has made bold pledges to build on President Bush’s global AIDS plan by removing ideological restrictions on comprehensive prevention programs and increasing support for the multilateral Global Fund to Fight AIDS, Tuberculosis and Malaria. Starting to implement these promises during his first 100 days would go a long way toward reasserting U.S. moral leadership in the world. Amid international economic turmoil, evidence-driven programs to combat AIDS abroad remain a smart and strategic investment in human security.” 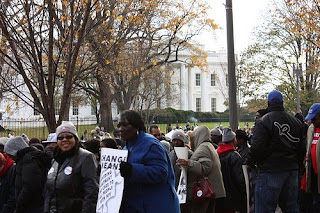