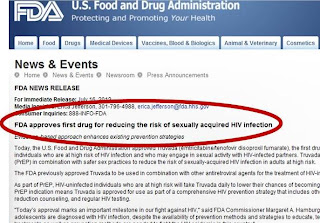 [Press release from AIDS Foundation of Chicago – home to IRMA]

Today, the U.S. Food and Drug Administration approved the use of Gilead’s  antiretroviral drug Truvada for HIV prevention — known as  pre-exposure prophylaxis (PrEP).

The AIDS Foundation of Chicago lauds this historic decision.

Truvada has long been an important component of treatment regimens for people living with HIV. Multiple studies found that Truvada, when taken daily as PrEP, in combination with safer sex practices, significantly reduced the risk of sexually-acquired HIV infection among high-risk adults. For more than a year, the AIDS Foundation of Chicago (AFC) has urged the FDA’s study and approval of Truvada for PrEP.
PrEP is one piece of the puzzle to preventing the spread of HIV/AIDS, said David Ernesto Munar, AFC’s President/CEO, and it is an important tool to have in a growing array of HIV prevention strategies.

“AFC has long supported the development of new prevention technologies, including PrEP and vaginal and rectal microbicides,” Munar said. “The FDA’s decision today on Truvada is exciting. Our challenge now is to implement PrEP as strategically as possible, and to ensure the people who need it most, those who are most at risk for HIV, have access.”

AFC’s support of PrEP has been multifaceted.  Last year, AFC launched a website of video and written PrEP testimonials called My PrEP Experience. Another AFC initiative, Mapping Pathways , has investigated various HIV prevention strategies — including PrEP — in different cultural contexts around the world.

And earlier this year, AFC joined a national coalition of AIDS organizations in support of the FDA’s approval of Truvada for PrEP.
“This is an enormous turning point, a real game changer, in the fight against HIV,” said Jim Pickett, AFC’s Director of Prevention Advocacy and Gay Men’s Health. “The toolbox we have been working for decades to expand now has Truvada as PrEP.”

“We can make a huge dent in new infections if we incorporate this tool into our prevention programming, and provide people more methods to avoid HIV,” Pickett said. “We can look forward to more sex acts being protected, especially among individuals who have already chosen, for whatever reason, to not use condoms consistently.”

Founded in 1985 by community activists and physicians, the AIDS Foundation of Chicago is a catalyst for local, national, and international action against HIV/AIDS.

*Please look for us on Facebook: www.facebook.com/InternationalRectalMicrobicideAdvocates, and you can follow us on Twitter: @rectalmicro. *Also, please note that shared news items from other sources posted on this blog do not necessarily mean IRMA has taken any position on the article’s content.