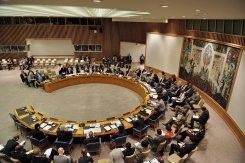 World leaders gathered at the United Nations to mark the 30th anniversary of the HIV/AIDS epidemic and put out a 102-paragraph declaration. Adrienne Germain, the president of the International Women’s Health Coalition (IWHC), has been working on women’s issues all her adult life and was active in the 1994 Cairo conference on women, also known as the CPD (International Conference on Population and Development). In an interview with the Huffington Post, Germain and Alexandra Garita, an international policy program officer at IWHC, discuss the declaration and the controversies that arise whenever sex is on the agenda. The declaration, produced every five years, gives U.N. agencies a mandate for their programs and advises governments where best to spend monies.
Q: What about access to family planning, to birth control?
AG: We lost reproductive rights and reproductive health language from the 1994 Cairo document and from early drafts here. Reproductive rights, for example, also includes the right to freely and responsibly decide on the number and spacing of one’s children. If you lose that and you have no reference to family planning services in the document, then you basically have no reference to contraception for women. You also don’t have protection for women living with HIV who are sterilized without their consent and who are forced to have abortion. It is not a rare occurrence in southern Africa (including South Africa).
Q: And how about the new studies on early intervention of Antiretroviral drugs (ARV) to reduce transmission, which are welcomed as a major breakthrough?
An important development is using ARV treatment much earlier in a person’s life in order to reduce the amount of virus in the body. Therefore the person will be less able to transmit the virus to someone else and you can use treatment as prevention. In this document, it is treated as a miracle breakthrough. We don’t look at it that way. Probably about half the people in the world who are living with HIV don’t know it. You are most infectious right after you have been infected. But at that time you have no symptoms at all so why would you go forward with testing? So to think that a medicine, a drug, is going to end this epidemic when we don’t even know how to get more people to come forward for testing — is really foolish. But debates on how best to end the epidemic go on all the time — how we should all be giving much more time to prevention. Yet this document ends up with four paragraphs -FOUR!-on prevention. Does that make much sense? No. Not in our book.
Q: Homosexuals and prostitutes were a big issue five years ago, even among some delegates from the Bush administration. Has this changed?
They are in the document for the first time. There was one paragraph that names the community of drug users, men who have sex with men and sex workers. That is very good. But this listing is used once only and then there is UN mumbo-jumbo in other paragraphs where you should have specific references about the kinds of interventions needed to reach this population and what they face in their lives. And there is nothing on human rights for these people (despite the UN secretary-general’s speech).
Read the rest here.
[If an item is not written by an IRMA member, it should not be construed that IRMA has taken a position on the article’s content, whether in support or in opposition.]