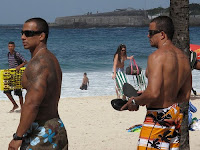 All had had sex exclusively with women in recent months, though some said they had had sex with a man in the past — ranging from 6.5% of the US men to 17% of the Brazilian men.