via OUT Impact, by Theodora Birch

“Denying who you are leads to acceptance.” 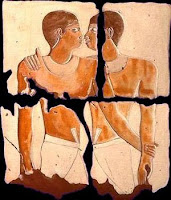 In Egypt, laws on public morality are severe – homosexuality is seldom openly acknowledged. Whilst being gay is not technically illegal it is unacceptable in Egypt, it is frowned upon socially, culturally, religiously and politically. Gay people are vilified by the press and the public, Al Balagh Al Gadid, an independent weekly newspaper, was banned after accusing actors of homosexuality.

The personal struggle of many young gay Egyptians is constant- they must deny who they are to survive. Yet despite hostility, there are many Egyptians out there hoping that society will change its strict laws and accept them for who they are.

“Mohammed” is a good-looking man in his early twenties with a successful career and a very open mind. I met him for the first time in a quiet little coffee shop in central Cairo. In perfect English he tells me that he hides a secret most of the time: he is gay.

Below is a full transcript of our conversation. Mohammed touches on various issues: social perception, acceptance amongst his peers and family, as well as the personal struggle that he faces everyday with his religion and himself:

Theodora Birch, Out Impact: I wanted to start out by asking you, when you first realized that you were gay?
“Mohammed”: When I was eighteen, I knew.

TB: Did you struggle with this realisation?
M: Yes. I tried to fight my urges for a couple of months.

TB: Have you come out yet to your family and friends?
M: No. My family and none of my close friends know, only my friends amongst the gay community. I am seeing a therapist, and she suggested that I don’t tell them. I come from a conservative family, and they would not accept me. There is also a possibility that I might change, therefore it is best to keep quiet.