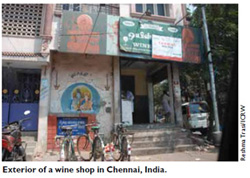 via AIDSTAR-ONE, by Reshma Trasi

In a busy neighborhood in Chennai, cars, motorcycles, bicycles, and pedestrians jostle for space on the narrow streets. Small shops line the sidewalks, offering everything from bright silk saris to auto parts. From a nondescript storefront comes the sound of clinking glasses and loud voices. Inside, one wall has shelves stocked with beer and hard liquor. In a back room are groups of men at counters and tables, laughing with friends or arguing about politics or cricket. Each has a glass and sometimes an entire bottle of alcohol in front of him.

One of the largest cities in South India, Chennai attracts men from all over the country seeking seasonal, unskilled, or hourly wage work. Away from their families, these men go to bars to socialize. Establishments that sell alcohol in Chennai range from holes-in-the-wall offering home-brewed toddy to high-end clubs selling expensive foreign alcohol. Somewhere in the middle of this spectrum are more than 600 wine shops, popular among men of all ages.

But the wine shops offer more than just a chance to relax and drink. Female sex workers also frequent many of the shops; at some locations, younger boys and hijras (transgendered persons) solicit sex. As male customers consume alcohol, inhibitions loosen, peer pressure builds, and the temptation to engage in high-risk commercial sex becomes harder to resist.