via The New York Times, by Donald G. McNeil, Jr. 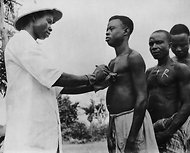 Our story begins sometime close to 1921, somewhere between the Sanaga River in Cameroon and the Congo River in the former Belgian Congo. It involves chimps and monkeys, hunters and butchers, “free women” and prostitutes, syringes and plasma-sellers, evil colonial lawmakers and decent colonial doctors with the best of intentions. And a virus that, against all odds, appears to have made it from one ape in the central African jungle to one Haitian bureaucrat leaving Zaire for home and then to a few dozen men in California gay bars before it was even noticed — about 60 years after its journey began.

Most books about AIDS begin in 1981, when gay American men began dying of a rare pneumonia. In “The Origins of AIDS,” published last week by Cambridge University Press, Dr. Jacques Pépin, an infectious disease specialist at the University of Sherbrooke in Quebec, performs a remarkable feat.

Dr. Pépin sifts the blizzard of scientific papers written about AIDS, adds his own training in epidemiology, his own observations from treating patients in a bush hospital, his studies of the blood of elderly Africans, and years of digging in the archives of the European colonial powers, and works out the most likely path the virus took during the years it left almost no tracks.

Working slowly forward from 1900, he explains how Belgian and French colonial policies led to an incredibly unlikely event: a fragile virus infecting a small minority of chimpanzees slipped into the blood of a handful of hunters, one of whom must have sent it down a chain of “amplifiers” — disease eradication campaigns, red-light districts, a Haitian plasma center and gay sex tourism. Without those amplifiers, the virus would not be what it now is: a grim pilgrim atop a mountain of 62 million victims, living and dead.