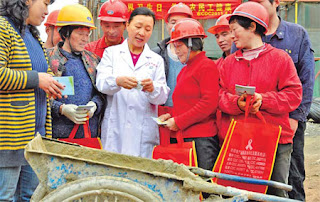 AIDS deaths are believed to be peaking on the Chinese mainland as many from the large number of people infected with HIV in the 1990s because of unsanitary blood-selling schemes develop full-blown AIDS, a senior health official said on Tuesday.

By the end of last year, the total reported number of AIDS deaths had reached 68,000, according to statistics from the ministry. Since 2008, AIDS has become the country’s top infectious killer and it claimed the lives of 7,700 people in 2010 alone.

“As those infected in the 1990s have developed full-blown AIDS, the number of deaths has surged,” Hao noted, adding that poor drug compliance largely because of side effects added to the number of deaths. To address the problems, the government cracked down on the illegal plasma-selling schemes, enhanced safety supervision and management of blood collection, and offered free medication to all patients. Currently, China has about 740,000 people living with AIDS/HIV, including 140,000 full-blown AIDS patients, official statistics show.

Hao urged people with the virus to accept the free medication they are entitled to and the first-line antiretroviral regimen, and said the government is making efforts to also provide free second-line drugs to those in need. The first-line antiretroviral regimen has helped reduce the fatality rate of full-blown AIDS patients on medication from 10.8 percent in 2005 to 4.6 percent last year.

In the past few years, men who have sex with men (MSM) have become one of the most vulnerable groups for contracting AIDS/HIV, experts said. Among the 44,000 new HIV infections detected in 2010, nearly 13 percent were infected through gay sex, according to the Ministry of Health. “AIDS/HIV became rampant among the MSM population which has an average HIV prevalence of 5 percent nationwide,” Hao said. He noted that the infection rate is 0.05 percent among the general population.