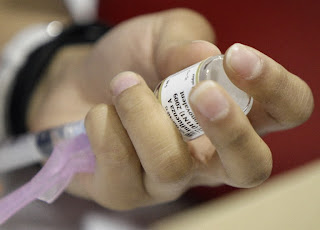 Duke University Medical Center vaccine experts have assembled an international team of investigators to design and implement the first human trial of a mosaic HIV vaccine candidate, a novel strategy that attempts to counter one of the most daunting challenges in HIV vaccine design: the virus’s extensive genetic diversity.
Traditional HIV vaccines are designed to stimulate the body’s immune system to recognize naturally occurring stretches of specific amino acids in the virus’s proteins. In contrast, mosaic vaccines are composed of many sets of synthetic, computer-generated sequences of proteins that can prompt the immune system to respond to a wide variety of circulating HIV strains.
Such vaccines have already been studied in animals and have shown some success in enhancing the breadth of immune responses. Now, Barton Haynes, MD, director of the Duke Human Vaccine Institute and the Center for HIV/AIDS Vaccine Immunology (CHAVI), says a newly formed research coalition has begun designing an early phase safety trial to assess mosaic vaccines in humans. The trial will test the mosaic concept and could possibly lead to the next generation of HIV vaccine candidates.