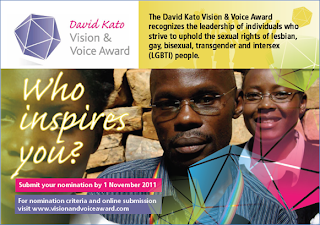 David Kato – human rights activist, friend, and colleague – was murdered in his home in Kampala, Uganda on 26 January 2011.

In recognition of his life and courage, and the continued struggle of lesbian, gay, bisexual, transgender and intersex (LGBTI) individuals around the world, partners committed to eliminating violence, stigma and discrimination have established the David Kato Vision & Voice Award.
Inspired by his work, the award recognizes the leadership of individuals who strive to uphold the numerous dimensions of sexual rights for LGBTI people. Sexual rights are an evolving set of entitlements related to sexuality that contribute to the freedom, equality and dignity of all people, and are an important aspect of human rights. The realization of these rights is also an integral element to a meaningful HIV response among these marginalized groups.