Critics question the relevance of the African studies, saying that most of the HIV transmission in the United States occurs among drug addicts and gay men, whose risk would be unaffected by whether they were circumcised. They also worry that it will give circumcised men a false sense of security. And they say it permanently diminishes the sexual experience. 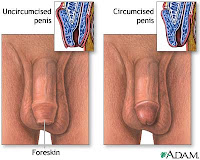 Circumcision, long one of the most emotionally charged surgical procedures performed in the United States, has become the focus of yet another intense debate as leading health authorities are about to issue major new evaluations of the potential health benefits of the operation.

The war of words over the procedure has been sparked by a decision by the federal Centers for Disease Control and Prevention to issue recommendations for the first time about whether newborn boys and possibly even adult men should undergo the common surgical procedure, just as the American Academy of Pediatrics is poised to revise its position of not recommending the operation.