“While these results are very interesting and hopefully may lead to a new weapon against the HIV pandemic, they are very preliminary and it is far too soon to recommend the general use of vaccinia immunization for fighting HIV,” Weinstein said in a statement. Given the great difficulties researchers have encountered in trying to develop an HIV vaccine, the ironic fact is that we may once have had a vaccine that is more effective against the virus than anything that has since been developed, and we threw it away. 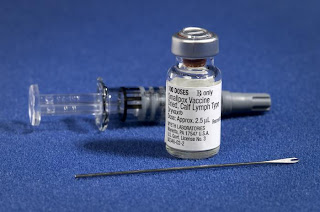 Laboratory tests suggest that immunity to smallpox triggered by the vaccinia (smallpox) vaccine can inhibit the replication of the AIDS virus. Such vaccination could have kept HIV transmission partially under control in the early days of the outbreak, but withdrawal of the smallpox vaccine in the 1950s would have freed it to spread unfettered, the researchers said.
Read the rest.