Via Poz, by Regan Hofmann with Oriol R. Gutierrez Jr. 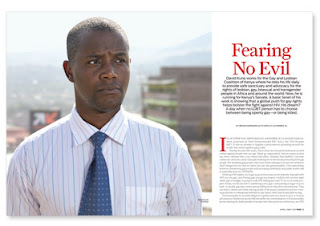 David Kuria works for the Gay and Lesbian Coalition of Kenya where he risks his life daily to provide safe sanctuary and advocacy for the rights of lesbian, gay, bisexual and transgender people in Africa and around the world.

Now, he is running for Kenya’s Senate. A basic tenet of his work is showing that a global push for gay rights helps bolster the fight against HIV. His dream? A day when no LGBT person has to choose between being openly gay—or being killed.

In October 2009, David Bahati, a member of Uganda’s parliament, proposed an “Anti-Homosexuality Bill” (a.k.a. the “kill the gays bill”). It was an attempt to legalize a phenomenon spreading around the world: hate crimes against gay people.

Homosexuality is currently illegal in Uganda (and can result in up to a 14-year jail sentence); Bahati’s proposed bill intensifies the criminalization of homosexuality by introducing the death penalty for people who have previous convictions, are HIV positive, or engage in same-sex acts with people younger than 18. The bill also includes provisions for Ugandans who engage in same-sex relations outside the country—people can be sent back to Uganda for punishment.

Not that there are many safe places to go; laws against same-sex relations exist in nearly 80 countries. Finally, the bill outlines penalties for individuals, companies, media organizations or nongovernmental organizations that support LGBT rights. (As in, if you know your neighbor’s gay and don’t say so, you can get into huge trouble yourself.) It engenders nothing short of a witch hunt.