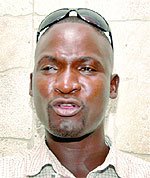 Via Behind the Mask.
A man who in 2009 renounced homosexuality at a public forum in Kampala has now told Behind the Mask that he regrets his previous actions and would like to be forgiven by the LGBTI community.
Saying that he felt “there is a fire in the belly saying gay is really who you are,” Mr George Oundo, known amongst Uganda’s LGBTI community as “Ms Georgina,” said that although he had renounced homosexuality on national media, at an opportune time he would ask the Kuchu community (Ugandan slang for LGBTI) to take him back.
Speaking on Wednesday July 27, 2011 to Behind the Mask outside the magistrate’s court in Kampala where three Christian evangelist preachers have been charged with making homophobic smears against a rival preacher, the now former ex-gay Oundo said he once again believed, “being gay is natural and inborn.”

The accused preachers, their lawyers, Henry Ddungu and David Kaggwa, together with David Mukalazi and Deborah Kyomuhendo (agents of the accused) face charges of conspiring to injure Pastor Robert Kayanja’s reputation by claiming that Kayanja sodomised boys in his church. The two lawyers are charged with allegedly commissioning false affidavits.

In March 2009 Oundo spoke at a Christian seminar and said he previously supported homophobic preacher Martin Sempa and legislator Mr David Bahati in their claims that homosexuals recruit children in schools and deserve the death penalty.

Speaking on Wednesday however, the now former ex-gay man said that he regrets the comments.

Looking sad, Mr Oundo, who once helped to establish an LGBTI human rights advocacy group in Kampala, said that although the preachers had given him some money and built him a house in Muyenga-Bukasa, a posh suburb of Kampala, he still had gay feelings. “I have never even become born again. I just do not want to be born again.”