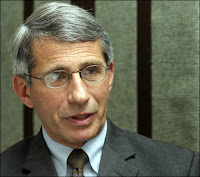 Via AIDSMap, by Gus Cairns.

Two consecutive sessions at the sixth International AIDS Society conference in Rome yesterday were devoted, now we have convincing scientific data on the benefits of treatment as prevention and PrEP, to putting these new prevention methods into practice.

“We have moved from ‘What if?’ to ‘What now?’” was the comment of Mitchell Warren, Executive Director of the AIDS Vaccine Advocacy Coalition (AVAC), on what else we need to know, what barriers need to be addressed , and what resources might be required, to maximise the promise of antiretroviral-based prevention.

Anthony Fauci, Director of the US National Institute of Allergies and Infectious Diseases (NIAID), said: “We now have a solid scientific foundation to say that even in the absence of a vaccine we have the capacity to end the epidemic. I can’t go to the US President and say: ‘We can cure HIV.’ But I can say ‘Ending the epidemic is scientifically doable’.”

Earlier, however, Nancy Padian from the Office of the US Global AIDS Coordinator had outlined formidable challenges still to be answered if antiretroviral treatment could bring about this goal.

She said that questions still needing answers include whether antiretroviral drugs (ARVs) really are a durable and reliable means of viral load suppression over a period of years and whether increasing the proportion of people on treatment would lead to increased levels of resistance. The biggest practical question, however, was whether treatment as prevention would work in situations where a high proportion of transmissions came from people with acute, recent HIV infections.

The biggest barriers to treatment as prevention, however, are stigma and lack of resources. Implementing ARV-based prevention would not only be expensive in terms of drugs; it would require added human resources and increased training and task-shifting for prevention counsellors so they can deal with biomedical data. There would also be added costs in terms of tests and monitoring.

The other big barrier will be the stigma of being tested, she said, particularly for at-risk populations in societies where injecting drug use, male-male sex, or sex work were criminalised and stigmatised. Treatment as prevention would require people not simply to test and then go to more supportive community organisations for prevention advice; it required a much closer relationship with medical personnel who might be prejudiced or feared to be so.

Mitchell Warren issued a call to action to implement the new strategies, but his presentation was tempered by realism. “We have evidence, we have data, and we now need to make decisions,” he said.