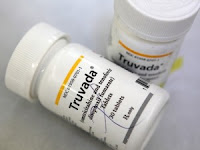 Via Nature News, by Erika Check Hayden.
When the US Food and Drug Administration approved Viagra in 1998, officials never considered one possible side effect of the drug: higher rates of sexually transmitted diseases among men who, thanks to Viagra, would become more sexually active. A powerful tool in the fight against HIV is raising similar questions about the possibility of unintended public-health consequences if drugs are approved for use in healthy people and cause them to alter their behaviour.
Several studies in the past year have reported that the very drugs used to treat people with HIV can also stop healthy people from becoming infected (see table). But people taking the drugs may adopt riskier behaviours because they feel protected — a phenomenon known as ‘risk disinhibition’ — undermining the benefit of the drugs and potentially infecting others. Moreover, those who become infected while taking the preventive regimen might develop drug-resistant viruses that they could then transmit to others. “You have this wonderful scientific breakthrough,” says Kevin Frost, chief executive of the Foundation for AIDS Research in New York City. “But what are the practical implications?”
Researchers will mull over these issues on 19 August at a meeting convened by the Forum for Collaborative HIV Research in Washington DC. The questions have become more urgent since January, when the drug firm Gilead of Foster City, California, announced that it plans this year to ask the Food and Drug Administration (FDA) to approve its HIV drug Truvada for use in healthy people — in what is known as pre-exposure prophylaxis, or PrEP. Truvada, which contains the antiretroviral drugs tenofovir and emtricitabine, has been used in many of the PrEP trials. In the three clinical trials that have reported benefits for PrEP so far, once-a-day pills have cut a person’s risk of acquiring HIV by between 44% and 73%, a variation that is due primarily to differences in how strictly patients stuck to the daily regimen. Although the need for PrEP is greatest in poor countries, approval in the United States could greatly expand the market for Truvada, which generated US$2.65 billion in sales last year.
Read the rest here.
[If an item is not written by an IRMA member, it should not be construed that IRMA has taken a position on the article’s content, whether in support or in opposition.]