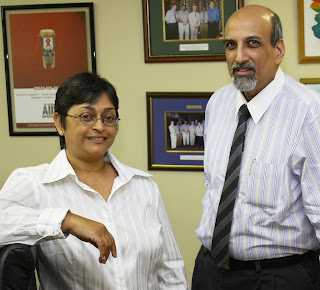 Vienna, Austria July 19, 2010 – Today at the XVIII International AIDS Conference in Vienna, Austria, members of the International Rectal Microbicide Advocates (IRMA) and thousands of other HIV advocates and scientists cheered a long-awaited, much anticipated success in the quest for new HIV prevention technologies. Researchers announced that a vaginal gel has been shown to significantly reduce a woman’s risk of being infected with HIV and genital herpes.

These game-changing results of the safety and effectiveness study of an antiretroviral microbicide gel were reported by the Centre for the AIDS Programme of Research in South Africa (CAPRISA).

The microbicide gel that CAPRISA studied contained 1% tenofovir—an antiretroviral drug commonly used to treat people living with HIV—and was found to be 39% effective in reducing a woman’s risk of becoming infected with HIV during vaginal intercourse and 51% effective in preventing genital herpes infections among the women in the trial. These protective effects increased as the use of tenofovir increased, so that women who used the gel in more than 80% of their sex acts during the trial had a 54% reduction in HIV infections. If and when other studies of tenofovir gel confirm these results, widespread use of the gel, at this level of protection, could prevent millions of new HIV infections over the next two decades. Tenofovir is also being studied as a form of oral pre-exposure prophylaxis. 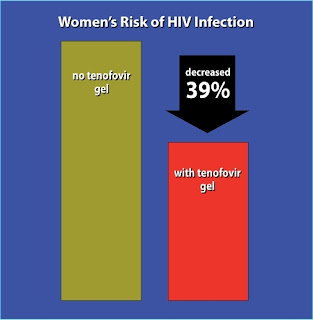 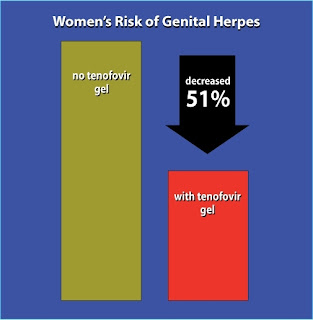 “The positive results from the CAPRISA 004 study represent a very significant milestone in HIV prevention research and they increase optimism that we can develop safe and effective antiretroviral rectal microbicides,” said University of Pittsburgh’s Dr. Ian McGowan, IRMA Scientific Vice-Chair and co-principal investigator of the Microbicide Trials Network. “Phase I rectal safety studies with tenofovir are ongoing and these efforts need to be intensified to help us move forward to rectal microbicide effectiveness studies as quickly as possible,” he said.

Globally, gay men and other MSM are 19 times more likely to be HIV infected compared to the general population. These disproportionate rates extend to Africa, where the epidemic is often characterized as “heterosexual.” In Uganda for instance, HIV rates among gay men and other MSM are just above 40% compared to 5% for men of reproductive age. In South Africa, where the global AIDS pandemic is most severe, the HIV rates between gay men/MSM and men of reproductive age are almost the same – both hovering around 15%.

While the rectal microbicide field has gained significant momentum, more focus and resources are needed. In 2010, U.S. $7.2 million is being spent globally on rectal microbicide research. IRMA has calculated that annual investments must increase by 40% from 2011 – 2014, to U.S. $10 million/year and must increase further to U.S. $44 million (a six-fold increase) in the years 2015 – 2020 to ensure a minimum of candidate products are moving through the research pipeline into late stage testing for effectiveness.

“We are optimistic that the CAPRISA results will not only accelerate the development of safe and effective vaginal microbicides, but that this proof of concept will also be translated into more financial and creative energy into rectal microbicide development,” said Pickett. “With five new infections for every two individuals beginning treatment, it’s absolutely imperative we find new ways to prevent HIV for individuals at risk, gay and straight, women and men.”

***** Click here for the article in Science – Effectiveness and Safety of Tenofovir Gel, an Antiretroviral Microbicide, for the Prevention of HIV Infection in Women