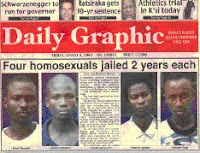 Understanding the Drivers of Homophobia in Ghana
Via PlusNews.
Recent condemnation of homosexuality by religious and political leaders in Ghana has led to a climate of fear preventing men who have sex with men (MSM) from accessing vital health services, say local NGOs.
The minister of Ghana’s Western Region, Paul Evans Aidoo, publicly described homosexuality as “detestable and abominable” after media reports in late May that 8,000 homosexuals had registered with health NGOs in the country’s west (the information appears to come from records kept by the NGOs of people who accessed services for MSM). Aidoo has since called for increased security in the region and the arrest of all homosexuals. Other religious leaders and politicians have followed suit, condemning homosexual activity.
As a result, far fewer MSM are accessing safe sex education and support programmes run by the Centre for Popular Education and Human Rights (CEPEHRG) to prevent the spread of HIV, said MacDarling Cobbinah from the Coalition against Homophobia in Ghana and a member of CEPEHRG.
“It has brought about a lot of fear and stigma for the people. It is difficult to organize programmes,” Cobbinah said. “It is very difficult for people to walk freely on the street… The call for arrest has really pushed people down.”
He added that one of his colleagues was recently accused of being gay and beaten up by a group of men.
Cobbinah said numbers had dropped at a regular HIV peer education programme that once had more than 20 people attending; two weeks ago only half the people came, and last week no one came, he told IRIN on 27 July. “They said, ‘If we come, we might be arrested.’”
An estimated 25 percent of Ghanaian MSM were HIV-positive in 2006, according to the US Agency for International Development (USAID).

According to the UN World Health Organization, since the beginning of the epidemic in the early 1980s, MSM have been disproportionately affected by HIV. The organization said social discrimination of MSM led them to delay or avoid seeking HIV-related information, care and services.

Other organizations in Ghana are also facing obstacles to providing vital services. An NGO based in the Western Region’s capital Sekondi-Takoradi, which distributes condoms and safe sex information to MSM, told IRIN that since Aidoo increased security and called for arrests they have felt threatened.

Male-to-male sexual relations are a crime in Ghana. Considered a misdemeanor, it carries a maximum sentence of six months, according to Kissi Agyabeng, a law lecturer at the University of Ghana. However, despite Aidoo’s calls for a crackdown, arrests do not yet appear to be taking place.

A spokesperson for the Sekondi-Takoradi NGO, who did not want his name or the organization’s name published for security reasons, said the NGO was now coming under pressure from the government to stop their work on HIV prevention if they did not reveal the names of MSM who have registered to use their services.

Stopping this work would affect thousands of people. In 2008, 2,900 people accessed their services, and by this year numbers had quadrupled, the spokesperson said.
…
Read the rest of the article here. For a fascinating personal story from a gay Ghanaian, read Paula Stromberg‘s article A Good Day in Ghana here.
[If an item is not written by an IRMA member, it should not be construed that IRMA has taken a position on the article’s content, whether in support or in opposition.]