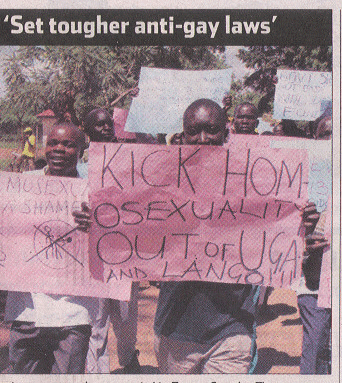 via Change.org, by Michael A. Jones

Hate never made for a good export. But that hasn’t stopped a prominent group of American evangelicals from trying to ship their anti-LGBT principles abroad. One glaring example of right-wing theology run amuck across the globe is fresh out of Uganda, where legislative efforts to attack Ugandan LGBT people reached fever pitch this week.

Uganda is an interesting example of how the radical religious right in the United States has sought to take their battle against all things related to homosexuality to a global level. Earlier this year, a prominent group of evangelicals — among them representatives from Exodus International and Defend the Family International — attended a conference in Uganda aimed at discussing ways to fight homosexuality. The goal of the conference was to brainstorm ways that the government, schools and churches in Uganda could “wipe out” homosexuality from the country.