[McNeil gets things a little confused overall in this article, sometime a bit fuzzy on the facts, but this has to be the most the New York Times has ever written on rectal microbicides, beyond the one word – “rectal.” This is pretty major – the rectal agenda has made the Times!] 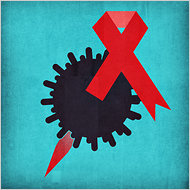 Gay and bisexual black and Hispanic men, who are now the highest AIDS risk groups in the United States, will be recruited soon in Boston, Pittsburgh and Puerto Rico to see if they find the gels acceptable, he said.

“The rectal microbicide field is about 10 years behind the vaginal one,” Dr. McGowan said.

That is partly due to misconceptions.

“When you mention rectal microbicides, a lot of people say ‘Oh, come on,’ because they think you have to protect the whole colon, and it’s meters long,” Dr. McGowan said. In fact, researchers believe protecting only the last six to eight inches will suffice.