“Talking about disease and fear haven’t worked very well. People believe they are in a safe relationship and that disease does not apply to them,” said Arushi Singh, a resource officer for the International Planned Parenthood Federation, which trains health educators in South Asia. “But pleasure,” she said, “applies to everybody.” 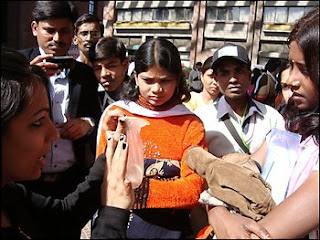 India did something unique to draw visitors. Amid all the sobering talk of at-risk communities, safe sex and health care, the festival invited bashful attendees to talk about pleasure.

At one booth, visitors were urged to leave tips in a drop box under a sign that asked, “Can safe sex be sexy?” In another booth nearby, the use of the female condom was demonstrated to curious onlookers.

But talking about sex can be an uphill task in India’s traditional and patriarchal society. Even though India gave the world the “Kama Sutra,” the ancient Sanskrit text about sexual behavior, open conversations about sex remain taboo in the country.