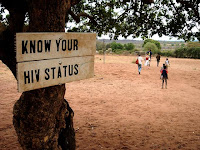 Discriminatory laws and a largely homophobic society mean that men who have sex with men (MSM) in Kenya generally find it difficult to access HIV-related information and health services, but rural MSM have an especially hard time.
When Kibet Kipsowen*, 30, a cattle keeper in Kenya’s Rift Valley Province, and his partner have sex, they use the oil-based jelly he applies when milking his cows; he’s never heard of a water-based lubricant, let alone used one. “Milking jelly is the only lubricant I have known for the last four years,” he told IRIN/PlusNews at his home in the village of Lanjuera.

According to a 2008 Modes of Transmission study conducted by UNAIDS and the government, MSM and prisoners account for 15.2 percent of new HIV infections in Kenya annually.

Kipsowen and his partner have been an item for a few years now, but dare not let anyone in their village know they are a couple. “Even people who have ‘normal’ sex do not speak about it – I can never reveal my sexuality or else I would risk being an outcast, or even be killed,” he said.

The only other person in the village who knows about his sexuality is Soita Wellapondi, a local nurse and social worker, and that’s only because Kipsowen visited her when he developed a sexually transmitted infection.

“At that time I had a lot of wounds in my anus; I felt so much pain that I thought I would die, yet I could not even confide to my own mother, brother or sister, and I could not visit a health centre,” he said.
He knew that by confiding in Wellapondi he risked his secret being revealed to the community, but he felt she was his only chance of accessing health care. “I bought him some antibiotics and pain killers; it was absolutely impossible to convince him to visit a health centre, even one far away where he is not known,” said Wellapondi.
Local health workers have very little experience and no training in dealing with MSM. A clinical officer at the Mogotio health centre near Lanjuera says he has only ever had one MSM client.
Even people who have ‘normal’ sex do not speak about it – I can never reveal my sexuality or else I would risk being an outcast or even be killed“He came here for treatment of injuries resulting from anal sex, and was advised to come for further treatment but he never came back,” said the clinical officer, who declined to be named.