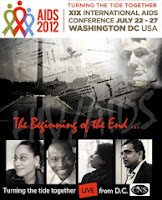 [Citizen News Service and IRMA are collaborating to amplify rectal microbicide research and advocacy, as well as IRMA-led initiatives, throughout AIDS 2012.]
via Citizen News Service, by Chief K Masimba Biriwasha
Condom-compatible lubes are a rarity in Africa forcing transgender women, gay men and other men who have sex with men (MSM) and heterosexual populations that engage in anal sex to utilize alternative methods that potentially exposes them to a range of sexually transmitted infections including HIV, the virus which causes AIDS. Following a meeting of Africa for Rectal Microbicides (Project ARM) held in Addis Ababa, Ethiopia, in December 2011, participants decided to create the Global Lube Access Mobilization (GLAM) initiative to support increased access and availability of condom-compatible lubes throughout the world, beginning with a focus on Africa, employing the tagline “And Lube!”