“IRMA develops means and strategies for organizing advocates on this area of research and practice by pooling in people from all paths of life, and does offer a very sound platform for sharing views, opinions, and informing key stakeholders in the prevention-focused research and practice.” – Maheswar Satpathy, Sydney, Australia 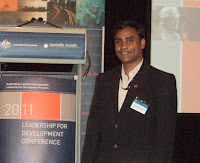 Maheswar Satpathy is originally from Bhubaneswar, Orissa in India. He now lives in Sydney, Australia. He is a trained clinical neuropsychologist, but his interests are broad, including HIV/AIDS prevention and health promotion. At present he is working towards his PhD in Health, Sexuality & Culture at the National Centre in HIV Social Research at the University of New South Wales (UNSW) on a prestigious AusAID’s Australian Leadership Awards Scholarship. He is extremely involved in public health, devoting his time to national and international organizations across the globe.
Maheswar was introduced to IRMA by colleague and friend Jim Pickett. He was encouraged to advocate for more innovative bio-medical prevention strategies along with the psycho-social ones he has researched. He believes that rectal microbicides should be emphasized as an important method of prevention which can act as a catalyst in preventing diseases like HIV, and several other health risks like HPV and other sexually transmitted infections.

He is excited to act as an advocate for rectal microbicides and to teach the usage patterns, newer emerging technologies in developing but emerging countries like India, which has the 2nd highest population in the world. He plans to work on health planning programs for effective dissemination, contact key groups for outreach, and lobby for translational bio-medical research in the Indian research centers and universities.

A busy man, whatever free time Maheswar has is spent in reading more books of psychology and literature, advocating for human rights and health issues among the LGBTQI population, and networking among the Civil Society Organizations both in India and Australia.

Read about other friendly rectal microbicides advocates. Newly featured advocates include Daniel Nuñez, Amy Stapleford Jackson, Luis Fernando Galarza, Vanessa Marquez, and Mark Hubbard.
Want to join the best e-mail discussion list on new prevention technologies on the planet? Send a note to IRMA here – rectalmicro@gmail.com – and we will get you signed up.Joining the list makes you an automatic IRMA member too!