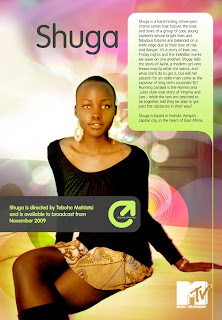 From CNN, by Tom Hayes

“It’s the story of morning afters and sweet departures…and the stains we leave on each other.” -From the trailer of Shuga, a cutting-edge MTV drama that’s been a smash hit in Africa.

For many young Africans, the three-part TV series about a group of students in Nairobi living under the constant specter of HIV/AIDS is the story of their own lives — and is the reason “Shuga” took the continent by storm when it debuted late last year.

Actress Sharon Olago, who played promiscuous party girl Violet in “Shuga,” believes the Kenyan show has been so successful because it mirrors the complexities of modern young life, without falling into a moralistic, conventional narrative on safe sex.

“‘Shuga’ did not exaggerate anything, it relived what Kenya is,” says Olago. “That is why it got the fame it did, that is why people jumped into it, because people saw themselves in it.”

Set and filmed on location in Nairobi, the soap opera came about after UNICEF teamed up with MTV to create a health campaign to impact the lives of youths in Kenya, where an estimated 6.5 percent of its population lives with HIV.

Read the rest and watch a clip