via Global Forum on MSM and HIV 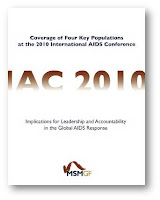 A new report indicates that the International AIDS Conference (IAC), a biennial event convened by the International AIDS Society (IAS) that has become the world’s premier gathering for people working in the field of HIV, suffers from gross underrepresentation of populations most at risk for HIV infection, including men who have sex with men (MSM), transgender people, sex workers and people who use drugs.  The independent audit, conducted by the Global Forum on MSM & HIV (MSMGF), confirms suspicions long-held by activist groups and calls for a comprehensive review of IAC governing structures.

Produced in response to growing concern among community groups that the IAC has repeatedly neglected these key populations, the report focuses on program content at the most recent IAC, held in Vienna, Austria in July 2010.  The analysis reveals that the percentage of all sessions at the conference exclusively focused on these groups was limited to 2.6% for MSM, 1.1% for transgender people, 3% for sex workers and 4.5% for people who use drugs.

“While the International AIDS Society turns a blind eye, HIV rates among these populations continue to climb around the world,” said Dr. George Ayala, Executive Officer of the MSMGF.  “The IAC is the world’s most important opportunity for international exchange and collaboration on HIV and AIDS.  Such abysmal representation of most-at-risk groups only serves to reinforce the invisibility, discrimination and disregard that drive the epidemic among these communities.”

Research has shown that these four populations are at higher risk for HIV infection than the general population in nearly every country context where reliable data exist.  MSM represent more than a quarter of HIV infections in Latin America and the Caribbean, people who inject drugs account for more than half of HIV infections in Eastern Europe,  and sex workers across Sub-Saharan Africa experience HIV prevalence rates of up to 50%.  Infection rates among transgender people in El Salvador, Indonesia and India are as high as 25%, 35%, and 42% respectively.

The IAC takes place in a different city every two years, gathering tens of thousands of experts and advocates from around the world to share the field’s most recent developments and engage in strategic collaboration.  The most recent conference hosted an estimated 25,000 people.

“Ostensibly, the IAC offers chances for local healthcare providers to learn ways to improve their services, provides channels for advocates to engage in dialogue with powerful decision-makers, and creates opportunities for community members to shape global funding and research agendas,” said Dr. Mohan Sundararaj, Policy Associate at the MSMGF.  “This really is a phenomenal platform, but how useful can it be when those who need it most are locked out?”

The report recommends a number of steps to bring the IAC’s program coverage of these key populations up to a level proportionate to their epidemiological burden.  Among these recommendations are efforts to ensure transparent processes for abstract review and program design, the development of targeted support to authors developing abstracts focused on key populations, and open representation of civil society on the committees responsible for developing conference programs.

“The International AIDS Conference has unparalleled potential to impact the global AIDS epidemic,” said Dr. Ayala.  “It is incumbent upon the organizers to ensure that the IAC becomes a vehicle for change, shifting the global landscape so that funding, research and programs are directed to those who need them most.  Right now it’s part of the problem.”