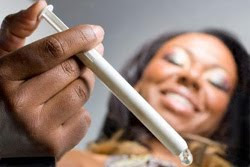 The HIV prevention world is abuzz with excitement following news of the first clinical evidence that a vaginal gel – known as a microbicide – can help to prevent sexual transmission of HIV infection.

A study by the Centre for the AIDS Programme of Research in South Africa (CAPRISA) found that a vaginal gel containing the antiretroviral (ARV) drug tenofovir was 39 percent effective in reducing a woman’s HIV risk when used for about three-quarters of sex acts and 54 percent effective when used more consistently. It also halved the incidence of genital herpes infections.

“Tenofovir gel could fill an important HIV prevention gap by empowering women who are unable to successfully negotiate mutual faithfulness or condom use with their male partners,” said Quarraisha Abdool Karim, one of the lead investigators of the study and associate director of Caprisa. “This new technology has the potential to alter the course of the HIV epidemic, especially in southern Africa where young women bear the brunt of this devastating disease.”