“It was an amazing group, and one that moved me to near tears on a number of occasions”

IRMA chairman Jim Pickett just returned from an inspiring week in Addis Ababa, Ethiopia, where he led a strategy meeting for the  IRMA’s Project ARM – Africa for Rectal Microbicides – and then attended the ICASA 2011 conference (read more about both here and here). We checked in with Jim for an update on IRMA’s Project on the meeting held December 2nd and 3rd.

The meeting, which was the result of 18 months of planning and coordination, convened about 40 individuals – both invited speakers and guests, including 16 individuals who secured scholarships to attend (out of 145 applicants.) The meeting participants represented countries including Ethiopia, Rwanda, Cameroon, Kenya, Nigeria, Zambia, Malawi, Zimbabwe, South Africa, Uganda, Canada, United Kingdom, and the United States -researchers, advocates, LGBT people, heterosexual people, and those representing sex workers, prison populations and more.

“It was an amazing group, and one that moved me to near tears on a number of occasions,” says Pickett, who explained that the aim of this meeting was for people to come together and create a strategy, a road map, around rectal microbicide research and advocacy specific to the African context. “I’ve been to many, many meetings – too many – in my day and I think the Project ARM meeting was, by far, one of the most productive, inspiring, exciting, energizing, and emotionally moving ones I’ve ever had the privilege to attend. Yes, I am obviously biased – but it isn’t often that events like these make me misty-eyed and put a lump in my throat – repeatedly.”

The journey to getting all these people together for this meeting was not easy, as many faced multiple challenges securing the required visas for travel to Ethiopia. Says Pickett, “There was this incredible energy in the room. We’d been planning this meeting for the past 18 months, and it has been a long journey for all of us to make this happen. A number of the people attending went to extraordinary lengths to get to Addis Ababa. They had to make so many trips to embassies and consulates for visas, so many obstacles were placed in their way to dissuade them from attending, but none of them took no for an answer. The incredible perseverance they exhibited simply to show up was extremely moving.”

What especially surprised and moved Pickett was the level of enthusiasm and positivity in the room. “A lot of these people come from countries that have seriously troubling environments and where advancing HIV prevention and advocacy is met with extreme homophobia. So I thought that a lot of the discussion would be on the challenges and obstacles– I mean, so many of the countries we were focusing on are settings where you can’t even think of doing a microbicide trial, let alone discussing sexuality openly without worrying for your safety – yet the participants didn’t get stuck on these negatives. These are men and women who are brave and strong and are committed to fighting for better health and civil rights for the people in their country. It was extraordinarily fulfilling to witness their passion and energy first hand; to see them standing up and doing this work despite the numerous challenges and obstacles in their way.” 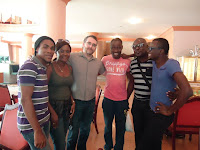 Dr. Ian McGowan, co-principal investigator of the Microbicide Trials Network (MTN) attended the meeting, presenting the latest in rectal microbicide science. He also addressed some of the questions regarding the recent closure of the VOICE trial’s study arm testing tenofovir gel. The decision was made due to futility – while tenofovir gel was found to be safe, the trial was not able to prove the gel worked to prevent HIV. See the statement from the MTN for more information. Previously the trial had to drop its tenofovir tablet arm due to futility as well. The Truvada tablet arm in the trial is continuing. “There was a lot of speculation in the room about why it was closed,” said Pickett. Many of the people present speculated that a lack of adherence might have been a factor, said Pickett. “But of course, it’s all speculation at this point, we don’t know what happened, and we won’t till the end of next year likely.” He added that McGowan confirmed that it is still important to move forward on both vaginal and rectal microbicide research and to keep exploring ways to create a more diversified microbicide pipeline (learn more about the microbicide pipeline here and here).

For Pickett, another big highlight was McGowan’s strong validation for Project ARM’s objectives. McGowan, a highly respected veteran in microbicides research, publicly offered MTN support for future Project ARM activities and commended the participants for their collective intellect and passion. Said Pickett, “Ian participated in many of the small break-out groups, and I think he was impressed by the high quality of thought, curiosity, and energy in the room. And to have that kind of validation from someone who is one of the key rectal microbicide researchers on the planet… it was a really big moment for us. There isn’t a doubt in my mind now that Africa is squarely on the rectal microbicide map.”

Pickett also felt that an interesting backdrop to the IRMA meeting was Hillary Clinton’s speech that formalized the Obama administration’s prioritization of LGBT rights globally, helping to bolster rights’ groups on the ground in their fight against discrimination. “At the end of the day,” said Pickett, “if people aren’t free to be who they are, wherever they are, they won’t be able to make use of any prevention technology, let alone rectal microbicides. There’s no point in having a really great microbicide on the shelf if people are not safe, and therefore unable, to access it.”

Jim Pickett is the Director of Prevention Advocacy and Gay Men’s Health at the AIDS Foundation of Chicago. He is chair of IRMA (International Rectal Microbicide Advocates), and a member of the Mapping Pathways team. A full report from the Project ARM meeting in Addis, laying out a rectal microbicide research and advocacy strategy for Africa will be released at the Microbicides 2012 conference in Sydney in April 2012. Until then, find updates here.

We are so proud of you Jim!!
[If an item is not written by an IRMA member, it should not be construed that IRMA has taken a position on the article’s content, whether in support or in opposition.]