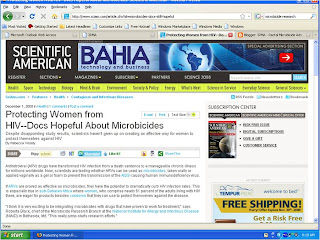 It is a real shame that this Scientific American article, posted today, ignores rectal microbicides and the prevention needs of gay men and other men who have sex with men. I urge IRMA members to read the item and post a comment (as I did), advocating for accuracy and inclusion when we discuss the important research happening around both vaginal AND rectal microbicides for both women AND men. And you may want to remind folks that unprotected anal intercourse is a common HUMAN behvior – and much more efficient at transmitting HIV compared to unprotected vaginal intercourse.
– Jim Pickett, IRMA Chair

Despite disappointing study results, scientists haven’t given up on creating an effective way for women to protect themselves against HIV

Antiretroviral (ARV) drugs have transformed HIV infection from a death sentence to a manageable chronic illness for millions worldwide. Now, scientists are testing whether ARVs can be used as microbicides, taken orally or applied vaginally as a gel or foam to prevent the transmission of the AIDS-causing human immunodeficiency virus.

If ARVs are proved as effective as microbicides, they have the potential to dramatically curb HIV infection rates. This is especially true in sub-Saharan Africa where women, who comprise nearly 61 percent of the adults living with HIV there, are eager for products besides condoms that they can use to protect themselves against the disease.

“I think it is very exciting to be integrating microbicides with drugs that have proven to work for treatment,” says Roberta Black, chief of the Microbicide Research Branch at the National Institute for Allergy and Infectious Disease (NIAID) in Bethesda, Md. “This really jump-starts research efforts.”

Microbicide research is at a crossroads as scientists begin testing the next generation of these drugs in the wake of a series of high-profile failures, including three late-stage clinical trials that were halted in the past year because the tested drug was found to be ineffective and, in one case, actually raised the risk of HIV transmission.