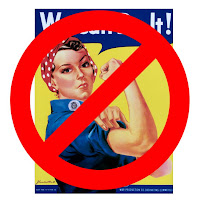 Rosie the Riveter is a cultural icon of the United States, representing the American women who worked in factories during World War II, many of whom produced munitions and war supplies. These women sometimes took entirely new jobs replacing the male workers who were in the military. Rosie the Riveter is commonly used as a symbol of feminism and women’s empowerment. Rosie’s picture came to represent the objective of microbicide research – an empowering tool that will enable women to have a HIV prevention option they could control, in their hand.

The microbicide research movement was actually initiated as a women empowerment movement. Women asked for a tool that they can control independently to help reduce their own risk of HIV infection. Women activists led by Lori Heise, started making a case for a women controlled option for HIV prevention. This movement was in response to a call made by an African woman on the need to have something to protect herself, Lori Heise often recalls. The earliest movement was focused on the development of a vagina application that could ensure women can use the product discretely if and when they choose too.

Trials in many African countries continue to suggest that discrete use of a microbicide may not be feasible – male involvement in the implementation of microbicide trials and its use by women engaged in the trials is important so as to ensure participant retention and prevent other potential social harm. However, Mitzy Gafos in her presentation titled ‘What have men got to do with it: the role of men in reproductive and sexual health in a predominantly rural are of KwaZulu-Natal, South Africa’ showed that women in South African can actually take decision about the use of the microbicide independent of their male partners. I would want to assume that this is the same in South West Nigeria where women are quite independent and are better able to negotiate the use of condom with their male sex partners.

Rosie the Riveter can no longer represent the face of microbicide research. Current research is looking at bioavailability of microbicide gel in the rectum and vagina and its efficacy in preventing HIV infection in both the vagina and the rectum at the best. This means a microbicide product can be used by men, women and transgenders.

The message about microbicide is no longer one of empowering women in Africa. The message is now about health and access to health product in African. Structural issues that will facilitate the uptake and use of microbicides are being discussed everyday. This includes the need to strengthen health systems so as to ensure product access, human right issues so as to ensure access by MSMs. The peculiar issues related to women, women access, women empowerment, has quietly fallen off the table. The events at the M2012 make this very clear.