[NOTE – not a word on rectal microbicides, and a rather pessimistic take on microbidide development from the Gates Foundations’s Tachi Yamada]

For years now, scientists have tried to find a product that would give women in developing countries more control in protecting themselves against sexually transmitted HIV. They have yet to find a universally effective and safe method.

A recent study presented at the Conference on Retroviruses and 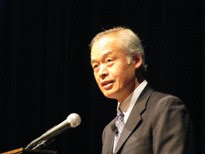 Opportunistic Infections in Montreal highlighted the dilemmas in this field — a gel to prevent HIV worked in 30 percent of the women who tried it. Many scientists have dismissed those results because there was a 1-in-10 chance that the effect was due to chance. Others who had great expectations riding on the findings were encouraged.

Still, Tachi Yamada (pictured), director of global health policy for the Bill and Melinda Gates Foundation, was concerned that the results were presented as promising.

“To me, it was very unfortunate,” says Yamada. “In fact, there should be a little bit of concern that this is now the fifth or sixth trial that came out statistically insignificant.”