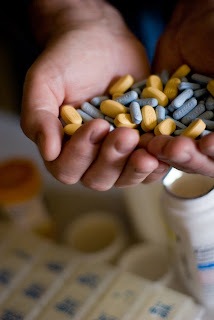 via POZ.com, by Tim Horn

HIV experts are at odds regarding an uptick in public policy and advocacy efforts to promote early HIV treatment, in light of the unknowns surrounding its potential benefits and risks. A clinical trial—the 4,000-patient START study—is now under way to explore some of the most pressing questions. But should activists and advocacy groups be waiting for answers?

A patchwork of data suggests that starting treatment earlier can benefit the health and longevity of people living with HIV, as it may better defend the immune system, lower the risk of non-AIDS diseases and further reduce the risk of death. It is this research that has sparked tremendous interest in the personal benefits of early antiretroviral (ARV) therapy.

Early treatment may also benefit the greater good of the public health. Some research suggests that undetectable viral loads in a large swath of the HIV population can potentially slow the spread of the virus. In turn, public health officials are considering whether widespread, immediate ARV therapy could be an effective HIV prevention tactic.

Few experts and activists argue that the research supporting early treatment is anything less than encouraging. Where there is less agreement, however, is whether enough sound, scientific research has been conducted to spell out the benefits and risks—the increased (or decreased) likelihood of short- and long-term side effects, adherence challenges and the development of drug resistance, for example—of early treatment and to warrant major changes to public policy. In fact, some of the most experienced and trusted sources of HIV prevention and treatment policy are struggling to make the right call.