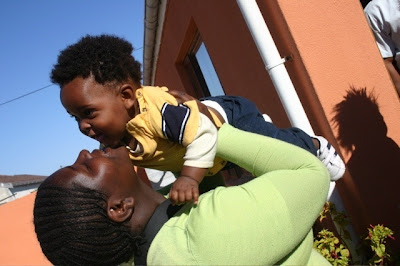 From Bloomberg Businessweek, by Randy Dotinga

New research suggests that alternative drug regimens in poor countries could help HIV-infected mothers and their infants more effectively fight off the virus that causes AIDS.
Currently, doctors lower the risk of transmission of mother-to-baby HIV infection by giving a drug to mothers right before birth and to babies right after. About half of the babies avoid getting HIV, but mothers and babies who do get infected often develop resistance to the drug, which is typically given to them later in life.
Enter the alternatives. “We now have a very effective treatment for women who’ve taken a specific drug and for babies at risk,” said Dr. Shahin Lockman, lead author of one of two studies about the regimens in the Oct. 14 issue of the New England Journal of Medicine.
There’s a big hitch, however: the alternative regimens are much more expensive than the current drug regimen, although the study authors weren’t able to give an estimate of the difference in costs between the regimens.
Read the rest
Read the full articles in the New England Journal of Medicine