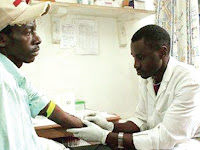 Via Next, by Gbenro Adeoye.
The first case of HIV/AIDS in Lagos was reported in 1986, unlike the global stage, where it was first reported 30 years ago by the Centres for Disease Control and Prevention (CDC) in the United States among gay men. Since the discovery in Lagos which was also the first in Nigeria, HIV has steadily grown to a status of silent foreboding among the general public. According to the Lagos State AIDS Control Agency (LSACA), the current HIV prevalence rate in the state is 5.1 percent, ahead of the country’s 4.1 percent prevalence rate recently announced by the Health Minister, Onyebuchi Chukwu.
But in the 25 year period, the state has seen significant progress in the level of public awareness, testing, treatment and care for persons living with HIV. In his assessment, the Head of Lagos office, United Nations Population Fund, Omolaso Omosehin, described the achievements made so far in the state as remarkable, highlighting improvements in the prevention and treatment of the disease. He said, “The situation is better than what it used to be; many people are now aware of how to prevent HIV/AIDS and there is hardly any health centre where you are not required to the test. Many more people are able to access antiretroviral (ARV) drugs which were not so available some years ago.”
Yetunde Ababi, a health educator, who tested positive for HIV in 1991, also acknowledged the improvements made in the treatment and care for persons living with HIV. Mrs. Ababi said “the epidemic was so much in the 90s and the drugs were so expensive that people were being screened into the mortuary. Then, we were spending about N90, 000 monthly on ARVs, but the drugs and treatment are now free in government hospitals in Lagos.”
Unfortunately, the stigma associated with HIV still denies infected persons job appointments and prevents many others from openly declaring their status. Patrick Akpan, the deputy coordinator of Plan Foundation for Health and Development, formerly called Positive Living Organisation of Nigeria (PLON), a nongovernmental organisation aimed at supporting persons living with HIV/aids, said the stigma against persons living with HIV in Lagos has been ‘modernised.’ According to him, people have invented new ways of discriminating against persons living with HIV. He said, “People won’t tell you that they are not relating with you because of your HIV status; they will rather find another excuse for avoiding you. They would rather say ‘you are not qualified for the job’, rather than say it’s because you are HIV positive.”
Read the rest here.
[If an item is not written by an IRMA member, it should not be construed that IRMA has taken a position on the article’s content, whether in support or in opposition.]