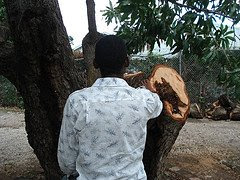 Lisa Biagiotti is working on signature stories for Worldfocus on HIV/AIDS and homophobia in Jamaica. She reported with Producer Micah Fink and Director of Photography Gabrielle Weiss, both from the Pulitzer Center on Crisis Reporting. Their reports will air on Worldfocus later this summer. Lisa gave the below interview to Thirteen.org.

Q: Gay pride is celebrated across the U.S. every June. Could there be similar celebrations of gay pride in Jamaica?

Lisa Biagiotti: No, there could not be an openly gay pride parade on the streets of Kingston, Jamaica, as in New York or San Francisco. In Jamaica, anti-sodomy laws criminalize sex between men, fundamentalist interpretations of the bible and pride in reproduction contribute to the general disdain and non-acceptance of the gay lifestyle.