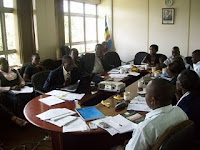 Via Behind the Mask.
In an incredible change of heart, the Uganda government has listed homosexuals as a target for HIV/Aids programming in a new five year National HIV Prevention Strategy for Uganda 2011-2015.
The policy document which Behind the Mask has seen will run under the theme: “Expanding and Doing HIV Prevention better.” The policy development process is spearheaded by the Uganda Aids Commission (UAC), with consultations of various stakeholders including Civil Society.

Until recently, the UAC had publicly stated that they had no funds for targeting homosexuals in HIV programming. “Gays are one of the drivers of HIV in Uganda, but because of meagre resources we cannot direct our programmes at them at this time,” Dr Kihumuro Apuuli, (pictured) the Director General of UAC was quoted saying in 2008.

However, some have suggested that the UAC was being influenced by Christian born again movements who were lobbying Uganda’s First Lady, Janet Museveni, a born again Christian herself, not to recognize gays in any policy document. The UAC was established by an act of Parliament, and is directly under President’s Office.

The National HIV Prevention Strategy sets forth opportunities and guidance for intensified efforts to significantly stem new HIV infections. Its vision builds on that of the National HIV/Aids Strategic Plan(NSP), of a Uganda where new HIV infections are rare, and where everyone, regardless of age, gender, ethnicity or socio‐economic status has uninterrupted access to high quality and effective HIV prevention.

“The overall goal of the strategy is to reduce new HIV infections by 30percent based on the baseline of 2009 which would result in 40percent reduction of the projected number of new HIV infections in 2015,” the policy text reads in part.

Ms Hasifa Nakiganda, an LGBTI lobbyist with Uhspa Uganda welcomed the contents of the draft policy. She said Uganda’s burying its head in the sand over homosexuals was setting a bad example, because Uganda was a reference country when it came to the best management of HIV/Aids. “So by denying homosexuals universal access to HIV programming, Uganda is sending a bad signal to other countries struggling with the HIV pandemic,” Ms Hasifa said. Uhspa Uganda petitioned the Ugandan Parliament pleading for homosexuals Right to Health and HIV programming inclusion.

Uganda has only one policy that recognizes homosexuals as a target for health service delivery- the National Policy Guidelines and Service Standards for Sexual and Reproductive Health and Rights. But homophobia prevents gays from accessing public health services.

The new NPS policy aligns with the National Development Plan for Uganda and the, the Second National Health Policy, and the Health Sector Strategic and Investment Plan (HSSIP) (2010-2015). It will contribute to attainment of Universal Access, as per the UNGASS- United Nations General Special Session Country Progress Declaration of Commitment on HIV/Aids and MDG (Millennium Development Goals) 5, 6, and 7 targets; calling  for increased focus, coordination and collaboration to comprehensively scale‐up HIV prevention efforts and align them to the drivers of the epidemic.

Read another Behind the Mask article discussing this news here.
[If an item is not written by an IRMA member, it should not be construed that IRMA has taken a position on the article’s content, whether in support or in opposition.]