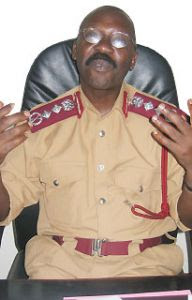 The Uganda Prisons chief is warning that homosexual behaviour, an indigenously vile and illicit act, is growing among prisoners, heightening the risk of faster HIV/Aids spread at confinement facilities countrywide.

In an exclusive interview on Thursday, Dr Johnson Byabashaija, the commissioner general of Uganda Prisons, attributed the upsurge in the vice to sexual starvation among inmates and general moral rot on Uganda’s streets.

And he added: “Cases of homosexuality, especially sodomy in “prisons are of two types; sodomy by consent and that by coercion. Sodomy by coercion, I think, is almost non-existent but the one by consent, I know, is definitely there.”

The catch-22 for authorities though, is how to employ known scientific preventive methods, including condom use, to scale down the worrying trend of sexual infections without violating any law or attracting government denunciation. They are doing the talking but the awareness campaign needs to be matched with tangible action for optimum results.

Giving out condoms to prisoners the way it is distributed to free men, said Dr Byabashaija, and could imply the discreet approval of homosexuality by Uganda Prison services.

Read the rest on Sunday Monitor.