As a follow-up from yesterday’s post Uganda gays celebrate court victory against newspaper below you will find a press statement from the newspaper in question – Rolling Stone. Thanks to Spectrum Uganda for this. 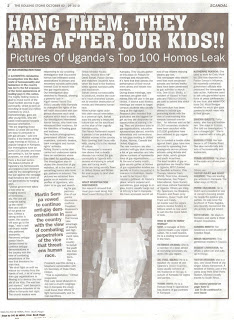 Homos had a short-lived smile today morning after The Rolling Stone management announced it would appeal against a High Court ruling which “permanently restrains” the investigative newspaper from outing their pictures.

Court at 10:00am said the newspaper should give these self-confessed criminals shs4.5m as compensation for violating their right of privacy.

This was in total disregard of the fact that the shamed homos’ pictures had appeared on a gay-networking website –gaydar.co.uk.

Justice Kibuuka Musoke said in his ruling read by the court registrar that by quoting a church leader calling upon government to hang homos, the newspaper put the lives and dignity of these fellows at risk!!

Can a newspaper incite government against a homo? If this is not fantasy then what is it?

Hanging is done after the due process of the law has been followed. Simple facts.

We would have paid them but doing so is as good as “paying a tribute” to those who promote sexual identity confusion and related madness.

Our lawyers said the controversial ruling does not only condone but perpetuates immorality with impunity.

It further sets a dangerous precedent for the nation and future generations.

The newspaper managers have resolved to register our grievance with the President’s office.

We remain strong that indeed in times of war, losses are expected.

The newspaper will fight homos on different fronts.

Our supporters should remain strong –the agents of the devil shall be defeated.

It’s a matter of time.

Sanity must prevail at all costs.