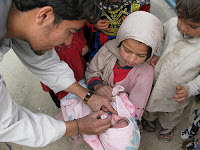 Via TIME, by Emily Rauhala.
Last week, the Guardian broke the news that in the run-up to the raid on Osama bin Laden’s compound, the CIA used a vaccination campaign as a ruse to get DNA evidence from the al-Qaeda leader’s kids. With help from a Pakistani doctor, Shakil Afridi, they set up clinics in two neighborhoods, delivering doses of the Hepatitis B vaccine to local children. The revelation drew a quick and angry response from health experts. Medecins Sans Frontieres called the operation “a dangerous abuse of medical care.” In the Washington Post, Orin Levine and Laurie Garrett warned that the CIA’s “reckless tactics could have catastrophic consequences.”

Indeed, they may. Here are three reasons why this is bad news for public health: