via The Daily Beast, by Joyce C. Tang

The first version of the female condom made a weird noise, fell out, and was expensive, too. Now public health experts are pushing a new and improved version in American cities. Can it overcome stigma? 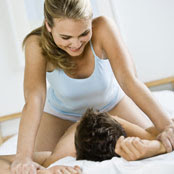 Made from polyurethane, which is less pliable than latex, the female condom could be uncomfortable and resulted in a less-than-intimate sexual experience. Users complained of a “crinkling” or “squeaking” noise—not to mention a tendency for the condom to slip out if not inserted properly.
But last year’s FDA approval of the second-generation female condom, called FC2, has prompted two U.S. cities, Chicago and Washington, D.C., to launch campaigns to reintroduce the contraceptive. Now made of nitrile, the crinkling and squeaking have been nearly silenced, and the FC2 costs 30 percent less than its predecessor did.