This instructional video was created to destigmatize and demonstrate the proper use of a female condom (FC1) between men. Created for a program in Burkina Faso, this video is presented in English here.

This video is also available in Moree (a primary language in Burkina Faso),  Dioula and French. For more information, please visit http://www.thecondomproject.org 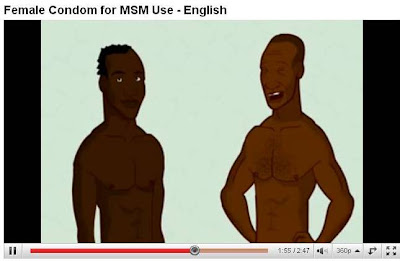 This is certainly an option to diversify your safe sex practices and/or for men who just don’t love male condoms – the top can feel less restricted and the condom can be inserted some time before sex. People can and should be more liberal with the lube inside the female condom because it’s less prone to slipping off or slipping into the anus.

Special note – there is a new female condom on the market, the FC2. This latest generation of the female condom is nearly identical to the original female condom, but includes some significant improvements. The FC2 is seamless, softer, quieter, thinner, and stronger that the first generation.  It is also made out of a synthetic latex called nitrile that is safe for folks who have latex allergies.

Approved by the Food and Drug Administration in early 2009 and now available for purchase in the U.S., the FC2 is the latest generation of the only woman-initiated HIV, STI, and pregnancy prevention tool currently on the market. New and improved, the FC2 is seamless, softer, and quieter than the original female condom. The FC2 is composed of a synthetic latex known as nitrile that is equally protective at reducing a person’s risk of HIV and STI infection as the FC1, and is safe for use by people with latex allergies.